I first set foot in northern Uganda in April 2004. To get there, you have to cross the Karuma Bridge over the Nile at a spot where the current is particularly strong.

Once in the North, a strangely deserted region appears. There is not a village in sight and no livestock in the fields. It is as though the entire country was sleeping. You see no visible scars of war, other than a few skeletal huts. Everything has been dismantled by the encroaching weeds.

After 20 years of fighting, the northern part of the country is a shadow of its former self, its social fabric destroyed, its resources rotted away, and its people slowly dying. I could not believe that the conflict that has been tearing this country apart for 20 years had received so little attention. 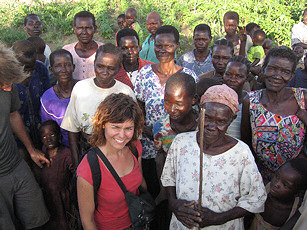 Uganda and its people force us to rethink our definition of war, too often restricted to violent imagery. In northern Uganda, what you see is the serial destruction, extraordinary but not spectacular, of an entire society.

For this reason I wanted to make a personal film — not one satisfied to show the conflict alone, but one that would bring it to life from the inside, as seen from the perspective of the people. It is their story that constitutes the starting point of the film, taking the viewer towards the participants, each of whom suffers the horrors of war daily and in their own way. By resisting, they manage to keep alive the humanity in all of us.

The stories are each told separately, but they converge at a single reality – that of an insidious, endless war, not explosive but omnipresent, fuelled by political interests that go unacknowledged but are not hard to see.

At this writing, no Ugandan north of the Nile has been spared, neither children nor old people. Rarely has a war gone so little noticed. Yet all it takes is a short trip across the Nile to hear voices piercing the silence – a silence as inexplicable as it is disturbing.